Past Presidents of the Del Mar Foundation Board of Directors

The mission of the Del Mar Foundation is to promote civic pride and cohesiveness, acquire and preserve open space, improve beaches and parklands, raise and grant funds, and sponsor diverse cultural programs and community events in Del Mar.

About the Del Mar Foundation

Best known for our Summer Twilight concerts, First Thursdays cultural arts series, and children’s events such as the Easter Egg Hunt and 4th of July Parade, the Foundation sponsors a wide array of community programs. The Foundation also provides financial support to community organizations and projects. Over the years, the Foundation has also served as an incubator or fiscal sponsor for many of the present day non-profits that so greatly enrich our community.

The Del Mar Foundation is governed by an 11-to-15-member volunteer Board of Directors. We are an active, hands-on organization, relying on volunteers and donations from a cross-section of the community.

A Peek into Our History…

The Del Mar Foundation celebrates 1982 as its founding year, but preliminary work to establish the Foundation occurred in 1981. The Foundation was established in part to manage the Del Mar Day event and its finances, following the success of the first Del Mar Day in 1980. From the beginning, the founding Directors (Lou Terrell, Joel Holliday, and Bill Kirwin) articulated an expansive and ambitious vision for the fledgling organization, including cultural and arts programming, raising and granting funds for the benefit of the Del Mar community, supporting the City’s acquisition of open space and other key properties for public use, and establishing an endowment to meet long-term needs.

The Foundation’s creation and early years: An annual community event that began in 1980 as Del Mar Day brought a vibrant, diverse set of activities to our community, and as noted above, the Foundation was established in part to manage this event and its finances. By 1983, an additional day was added, and  Del Mar Days featured a wide array of athletic events (a boogie board competition, rough water swim, triathlon, 10K town run, fun run, and bicycle race), historical and art studio walking tours, children’s events, art exhibits, music concerts, a “Revelry in Del Mar” parade, food, and more.

The Foundation’s programs quickly expanded beyond Del Mar Days to include the Summer Twilight Concert series, with the inaugural 1983 season held in Seagrove Park (now held in Powerhouse Park), and a spring concert series in 1984, featuring classical and American music programs at St. Peter’s Church and what was then the Del Mar Shores-MiraCosta College campus. The Foundation also sponsored its first significant public art program in 1984: Art In Public Places brought site-specific artworks to Del Mar for a two-month-long outdoor art display. 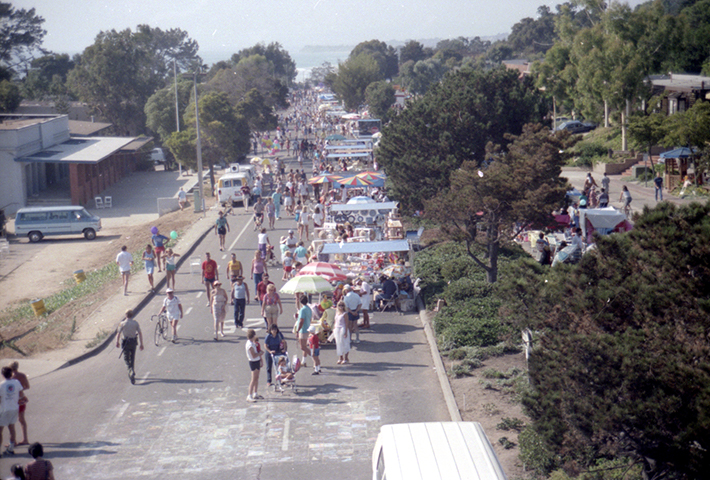 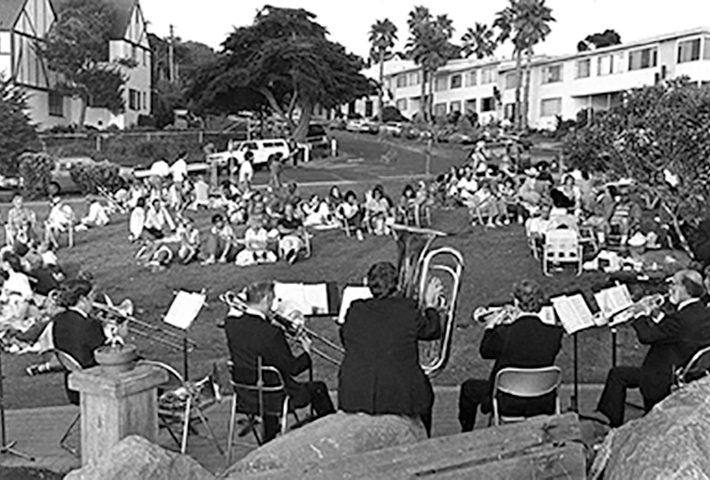 An expansive and enduring vision: The vision for the Foundation articulated by the first Board of Directors (Joel Holliday, Councilmember Lou Terrell, and Bill Kirwin) is notable for its breadth and ambition, encompassing much more than Del Mar Days and music concerts. In a 1983 letter to the Foundation’s friends and supporters at the close of the first Summer Twilight Concert series, the Board declared that the Foundation’s goals were “to provide the residents of and visitors to the Del Mar Community with cultural, recreational, and environmental amenities; to establish an endowment fund to provide both short and long-term funding sources for projects targeted to enrich the quality of life for Del Mar and the surrounding area; and to increase community involvement in civic affairs.” The letter reported that the Foundation was exploring producing a number of new projects, including “a winter indoor concert series, art exhibits, a program to stimulate the creation and acquisition of works of art for the City, and some Saturday morning childrens programs.”

The 1985 Board, by then expanded to nine members, affirmed this vision and expressed “future hopes” to mount a major capital improvement campaign for such projects as a civic center, library and park improvements.

From vision to reality: Throughout the nearly four decades since these early boards declared their vision for the Foundation, hundreds of Board members and other volunteers have worked to bring it to fruition.

The vision of musical, cultural arts and educational programs grew steadily from those first Twilight and Spring concerts. With the completion of the Powerhouse renovation in December 1999, the newly formed Cultural Arts set up an indoor concert series called “First Thursdays” with a speaker series, jazz, classical, and rock concerts on a subscription basis. In 2004, the Bluegrass and Beyond series was created by the Cultural Arts Committee, bringing nationally-acclaimed bluegrass and acoustic artists first to the Powerhouse, and now to Town Hall. DMF Talks, launched in 2012, has become the Foundation’s signature speaker series.

That early vision also brought many arts projects to Del Mar over the years. Three notable examples:  The Foundation’s month-long “Art in Public Places” program in 1984 featured the temporary installation of large-scale artworks by highly-acclaimed artists in various outdoor spaces in Del Mar, including a performance art piece on the beach. In 1998-99, the Foundation served as fiscal sponsor for the purchase and installation of the site-specific, commissioned James Hubbell sculpture placed at the Library after it moved into the renovated St.James.  In 2002, the Foundation sponsored Payasada, with artist-painted horses placed throughout town. And the Foundation served as fiscal sponsor for the mosaic wall (in front of the library) two times: in 2002-03, when the mosaic was originally installed, and in 2013, for a major restoration to repair water damage and ensure proper drainage.

The vision of fostering community cohesiveness brought such events as “end of summer celebration” community beach picnics featuring the Del Mar tradition of lemon cake, held in 1988 and various years since. Today’s Picnic at Powerhouse Park carries on that tradition, as do Community Night Out and Meet and Greet events. 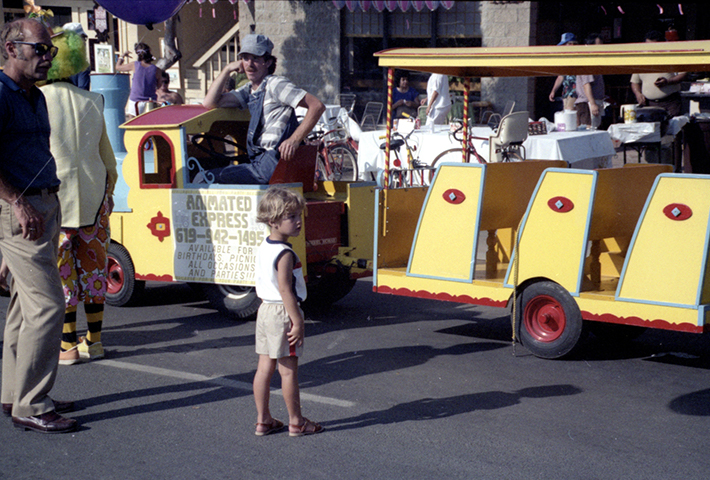 The vision to fund projects enriching the quality of life led to early and long-enduring support for programs such as Junior Lifeguards and arts, cultural and environmental  programs in our schools. The Foundation also served as an incubator for other Del Mar nonprofits that contribute to Del Mar’s quality of life.

The vision to create a community endowment was perhaps the most audacious idea the first Board articulated in 1983. By Sept. 1989, the Board had created an endowment fund of $100,000 under the leadership of President Rosanne Holliday. In 2004, an agreement with the San Dieguito River Valley JPA signed by Foundation President Lynn Gaylord resulted in the transfer of $500,000 to the Foundation, to be managed as an endowment to provide funding for the future physical maintenance and management of the San Dieguito Lagoon once responsibility for maintenance of the lagoon transfers from Southern California Edison to the JPA (an event which has not yet occurred). The creation of the Lagoon Endowment spurred the development of investment and financial management expertise within the Foundation that would make management of a significant community endowment possible.

In the Foundation’s 25th year (2007), that early vision was fully realized with the formal launch of the community endowment, with the initial goal to raise $600,000 in 2007-08. Joel Holliday, who had first articulated this vision in 1983 as one of the three original board members, served as the development chair guiding the establishment of the community endowment and leading the founding endowment campaign. Today, the Foundation manages more than $5 million in endowment funds.

The commitment to capital improvement and projects and public spaces can be found in many projects over the years:  in 1989, to beautify residential streets and assist in improving Powerhouse Park, and a decade later, in the Foundation’s fiscal sponsorship and a $10,000 grant for the campaign to renovate the Powerhouse, with the Powerhouse Community Center celebrating its grand opening in Dec. 1999. The Foundation’s history of funding Del Mar Garden Club-led public garden projects included a 1991 garden at the Post Office, followed by similar grants for other downtown and public spaces.

In later decades, the Foundaton’s greater resources resulted in a $35,000 grant for Shores Park acquisition, and a $35,000 grant for construction of the Beach Safety Center and Lifeguard Headquarters, with an additional $10,000 grant for the adjacent boardwalk and garden. The Foundation made a $125,000 grant for community-serving amenities for the Del Mar Civic Center, including staging and other furnishings and a state-of-the-art sound system for community events in Town Hall, elements of the catering kitchen that support nonprofit and community uses, and outdoor furniture that welcomes the community to the beautiful plaza spaces. More recently, the Foundation made a $180,000 grant to the City in response to Covid-19 impacts on the City’s budget, funding major repairs to the Beach Safety Center, Phase 3 of  the River Path Del Mar, extending the existing trail from the Grand Ave. Overlook (Bridge) to Crest Canyon, and other important community amenities.

Throughout the Foundation’s history, even as it continually adapts to changing times, its diverse array of programs, activities, and grants have something important in common: to stay true to the visionary course adopted by its founders and to develop and manage the resources that make it possible to bring that vision to fruition.